As part of its Market Watch and Add-in-Board report subscription services, Jon Peddie Research has continuously tracked GPU shipments. As a follow-on to its recent Market Watch Report, JPR is releasing the latest Add-in-Board quarterly report.

The add-in board market increased in Q2’20 from last quarter with over $3.5 billion dollars in AIBs shipped in the quarter. Notably, Nvidia gained significant market share.

Quarter-to-quarter graphics add-in board shipments increased by 6.6% and increased 36.7% year-to-year.

Jon Peddie, president of JPR noted, “Investors are worried that the unseasonal increase in AIB shipments in Q2 is due to a pull in of sales that would normally be sold in Q3 will cannibalize traditional Q3 sales. However, AMD and Nvidia are forecasting a robust Q3, and consumer sentiment is improving to support their expectations. New AIBs are expected from AMD and Nvidia, and Intel might bring out their AIB at the end of the quarter.”

Add-in boards (AIBs) using discrete GPUs are found in desktop PCs, workstations, servers, rendering and mining farms, and other devices such as scientific instruments. They are sold directly to customers as aftermarket products, or are factory installed by OEMs. In all cases, AIBs represent the higher end of the graphics industry with their discrete chips and dedicated, often large, high-speed memory. Systems with integrated GPUs in CPUs share slower system memory.

The PC AIB market now has just two chip (GPU) suppliers which also build and sell AIBs. The primary suppliers of GPUs are AMD and Nvidia. With anticipation that Intel will be entering the dGPU market later this year. There are 54 AIB suppliers. They are the AIB OEM customers of the two major GPU suppliers, which they call “partners.” Some of the AIB suppliers offer AMD and Nvidia-based products, and others offer only one or the other.

In addition to privately branded AIBs offered worldwide, about a dozen PC suppliers offer AIBs as part of a system, and/or as an option, and some offer AIBs as separate aftermarket products. We have been tracking quarterly AIB shipments since 1987—the volume of those boards peaked in 1999, reaching 114 million units, when every PC had a graphics AIB in them. This quarter 9.5 million shipped. 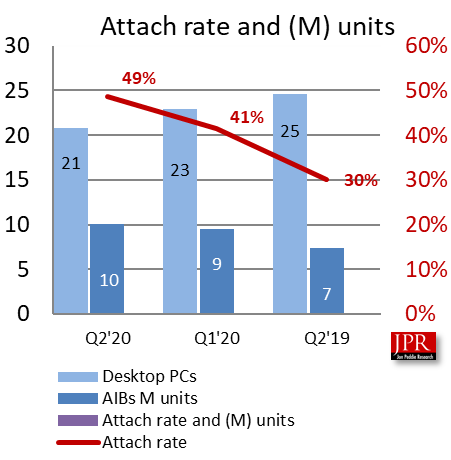 Looking at the above chart, the seasonal cycle has been lost due to the pandemic, and with the extended work and play at home change in our cultures, combined with almost instant gratification through on-line shopping, it may never come back.

On a year-to-year basis, we found that total AIB shipments during the quarter rose 36.7%, which is considerably greater than the delta in shipments for desktop PCs, which fell -9.5% from the same quarter a year ago.

Overall, AIBs shipments had been increasing while PC sales have slipped due to retrofitting. The gain by AIBs is largely due to gaming which was accelerated by the shelter at home requirements due to the pandemic. However, it is our belief that the gaming market has now expanded and the new gamers will continue to be player.

Despite of the overall PC churn, somewhat due to tablets and embedded graphics, the PC gaming momentum continues to build and is the bright spot in the AIB market. The impact and influence of eSports has also contributed to the market growth and has attracted new users. VR continues to be interesting but is not having a measurable influence on the AIB market.

JPR also publishes a series of reports on the PC Gaming Hardware Market, which covers the total market including system and accessories, and looks at 31 countries. More information can be found here:

Jon Peddie Research’s AIB Report is available now in both electronic and hard copy editions and sells for $2,750. The annual subscription price for JPR’s AIB Report is $5,500 and includes four quarterly issues, and four hours of consulting. Subscribers to JPR’s TechWatch are eligible for a 10% discount. Bundle packages are also available. For information about purchasing the AIB Report, please call 415/435-9368 or visit the Jon Peddie Research website at www.jonpeddie.com.

Contact Robert Dow at JPR ([email protected]) for a free sample of any of our reports.

Dr. Jon Peddie has been active in the graphics and multimedia fields for more than 30 years. Jon Peddie Research is a technically oriented multimedia and graphics research and consulting firm. Based in Tiburon, California, JPR provides consulting, research, and other specialized services to technology companies in a variety of fields including graphics development, multimedia for professional applications and consumer electronics, high-end computing, and Internet-access product development. Jon Peddie’s Market Watch is a quarterly report focused on the market activity of PC graphics controllers for notebook and desktop computing.

Jon Peddie’s Market Watch is a trademark of Jon Peddie Research.  All other tradenames and trademarks referenced are the property of their respective owners.