“It’s supposed to be hard. If it wasn’t hard, everyone would do it. The hard… is what makes it great.” Jimmy Dugan, “A League of Their Own,” Columbia, 1992

A few years ago, we were in a broadcast newsletter editor’s office and commented on the antique tube radio on the table behind him.

He said it wasn’t an antique but a working radio he warmed up for every NY Mets game.

He wanted to “see”, “feel” the game just like when he was a kid.

“There are so few great – and old – sports radio announcers left who can make you see the game or event in your mind,” he said, “and listening on a radio where the tubes are cooking/popping just adds to that reality.”

That really defines every sports fan – anywhere, any sport.

They want to feel every moment of the event as though they were on the field or court being an integral part of the action.

Range, Change – There is a broad range of sports for people to participate in and watch.  Everyone has her or his favorite; and over time, the one that is the most popular will shift.

Sports are probably as old as civilization itself.

History shows that people have been participating in sports for over 3,000 years with new individual and team games developed while others faded into oblivion or were replaced with newer versions.

Popularity Contest – It’s all about the fans because sports really are a key part of entertainment.  The most popular sports gather in the most money.

Depending upon the popularity of the sport, athletes negotiate multi-million-dollar contracts, teams/franchises collect hundreds of millions annually in ticket sales/branding as well as distribution rights with local, national and international radio and TV outlets.

Global Rules – While people have different ideas on which sport is the best, at least the rules are the same no matter where you play/watch them.

Soccer, or as what many refer to as real football, is played in over 200 countries and is comfortably the most popular sport in the world.  Football has some of the most renowned leagues in the world, is easy to follow, has a large/passionate fan base and the FIFA (International Federation of Association Football) World Cup has billions of folks following the action … everywhere!

Cricket is the second most popular sport with a strong following in Asia, England, Australia, Africa and New Zealand.

Basketball is popular in Australia, Canada and the Philipines; and is expanding fans/players in Europe, Africa and Asia with more than 100 leagues.

Field and ice hockey are popular in North America with field hockey having a wider following.

Baseball is a major sport in the Americas with heady sponsorships.

The sports have been the primary reason millions of households still pay their monthly pay TV bills even though they turn to one of their streaming services when they want to enjoy a new, unique film or show.

Face it, the new season of shows that networks have on their calendars are the same as last year’s “new, exciting” shows – reality, cops ‘n robbers, thin plots and news/interviews – so cutting the cable is easy, painless.

Except for the fact that it has been your connection to your favorite sport and team.

Yeah, according to Parks Associates, 55 percent of pay TV households keep their service because of live sports.

Life Line – Since almost the beginning of television, sports have been vital to keeping people connected.  They still are, but times are changing.

Millions of fans around the globe go out and buy a newer, bigger TV set so they can watch the FIFA World Cup, ICC World Cup, World Series, Super Bowl, Wimbledon and the Olympics.

In between these championships, folks are glued to their sets, cheering on their favorite teams and sports heros – Manchester, Team India, Dallas Cowboys, Golden State Warriors, Chicago Blackhawks, Serena Williams.

Age Differences – Some sports organizations/associations are getting concerned because the coming generation of fans have a different feeling on which sport is most important, which impacts their bottom lines.

tier one sports rights in their bundles.

Parks officials noted that the churn rate for pay TV services are significantly lower than that for OTT services.

To keep subscribers, national, regional and local services have even expanded their coverage relationships with college and secondary schools.

bundle, providers have been experimenting with ‘skinny bundles.’

The bundles come in a variety of flavors such as Foxtel’s Kayo Sports bundle in Australia.

However, as the availability of sports content has expanded, new sports OTT services and providers have reduced the demand – and need – for pay TV.

As a result, Pay TV providers are focusing their investments on tier two sports and premium

Pay-TV providers are evolving their value-add services such as shared viewing and personalized content for super-fans.

But they haven’t gone unchallenged.

Bidding Wars – Streaming video services have increasingly been hungry to have exclusive rights. Having sports available on their service means a built-in audience will follow.

Amazon has made it a priority to capture tier one sports rights in key markets and Apple TV+ recently became a premier sports service with NFL games in 2023.

However, Nielsen reports that sports ratings are declining, probably because of the proliferation of so many sports being available.  Ratings for football have declined more than 10 percent in recent years and MLB, NBA and NHL have also seen slight viewership drop in past seasons.

Despite this, live sports rights continue to rise.  Major media companies including Disney, Comcast, Paramount and Fox will probably spend $24.2B for rights in 2024, nearly double what they spent a decade earlier.

Despite the increased cost and questionable return, Disney Star will retain carriage rights through 2027 for an “undisclosed significant uplift.

Unfortunately, Disney+ Hotstar told shareholders to expect to see a decline in subscriptions in 2024 because they didn’t win the rights (pay lots of money) for the IPL professional streaming rights and Paramount + will get the games and subscriber uplift.

Disney+ has projected a loss of perhaps 20M subscribers.

But since Disney Star is keeping the pay TV rights – we know it’s complicated – it’s probably a profitable move.

On the other hand, the investment in sports streaming by Apple, Amazon and YouTube puts them in a strong position as cable bundle subscriptions weaken and their exclusive shows along with sports and their other business activities look even more inviting to consumers.

Sports are so popular – and difficult to locate on your various streaming services –  that JustWatch recently introduced a new free service ,JustWatch Sports justwatch.com/us/sports for Europe and the Americas with plans for availability in 100 countries by the end of the year. 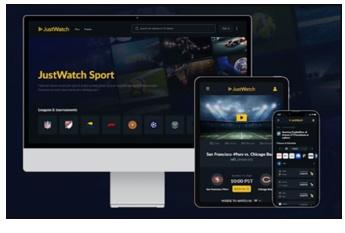 JustWatch Sports will cover a growing list of live sports days, times and location in addition to highlighting shows so fans can find out when and where to watch their favorite team or sporting event and surprise, all that convenience comes without a service fee … yep free!

A looming concern for sports leagues, franchises, clubs and even players is that the up-and-coming generation isn’t as hungry for sports as their parents.

Only 53 percent of Gen Zers identify as sports fans compared to 69 percent of millennials.

Oh No – The younger generation has said they are less interested in sports or that they can take them or leave them.  Shift is partially due to gaming and social media.

According to Morning Consult, Gen Zers find Esports more popular than MLB, NASCAR, NFL, NHL, NBA or other sports with only 35 percent identifying as fans.

While millennials couldn’t get enough of live sports, the up-and-coming consumers – 20.3 percent of the US population – just aren’t that interested.

The trend worries the sports industry, which grew to more than $90B thanks to skyrocketing media rights and sponsorship revenues.

The gap is even worse when you separate out males – normally the largest fanatic segment – with 58 percent of male Gen Zers identifying as sports fans compared to 75 percent of all adult men.

Overlap – There are too many different sports to watch around the world and there are more screens to watch them on, especially the screen in the fan’s hands.

The challenge, according to industry executives, is to make the sporting events more compatible with the younger crowds’ short attention span/variety way of life including gamification, daily fantasy, free-to-play games and ultimately … betting.

The federal law prohibiting states from authorizing sports betting was unconstitutional back in 2018, which opened the door making it legal – and active – in all but nine states.

Although the size of the betting “market” varies widely by organizations estimating the market size, the US Census Bureau estimates that legalized sports gambling in the US will generate more than $2B this year and increase to more than $10B by 2028.

Others put it larger – much larger. It’s still a huge number and it can produce new revenue for sports rights holders and broadcast/streaming services.

That’s one of the key reasons one of Disney’s activist investors – Third Point – “suggested” the company spin off sports-media juggernaut ESPN and use the “spare money” to buy out Hulu’s minority shareholder, Comcast.

If Disney makes the move and retains a contractual link, the company could then delve more deeply – and aggressively – into sports betting while maintaining an arm’s length distance, thus maintaining its family-oriented interest and image without a direct relationship.

Betting – To make sporting events more interesting for some people they have to have “some skin in the game” or something to win/lose.  Mobile betting for some spice things up.

While it’s true sports betting provides some folks with a decent supplemental income, it can also be very addictive, especially for the younger crowd that rely on their smartphone for just about everything.

Globally, gambling is estimated to be a $400B business with 30-40 percent of the total coming from sports betting.

While online sports betting is certainly less risky than playing the odds in Las Vegas; or worse yet, buying a lottery ticket or two, it’s still a long way from a “sure thing” or something we’ve bothered “playing”.

Sports is a lot more than just the competition on the field or on the court any given day. Ultimately, it’s all about the money.  Money for the individual participants, the team/franchise owners, the pay TV/streaming services and the advertisers.

Source – “A League of Their Own,” Columbia

There are millions, billions of folks around the world who agree with Helen Haley in A League of Their Own, when she said, “This will be better than a movie!”

We just don’t happen to be one of them…

The only reason we watch the Super Bowl is to see the really great commercials and the stuff some companies waste millions on.

Andy Marken – [email protected] – is an author of more than 700 articles on management, marketing, communications, industry trends in media & entertainment, consumer electronics, software and applications. An internationally recognized marketing/communications consultant with a broad range of technical and industry expertise especially in storage, storage management and film/video production fields; he has an extended range of relationships with business, industry trade press, online media and industry analysts/consultants.